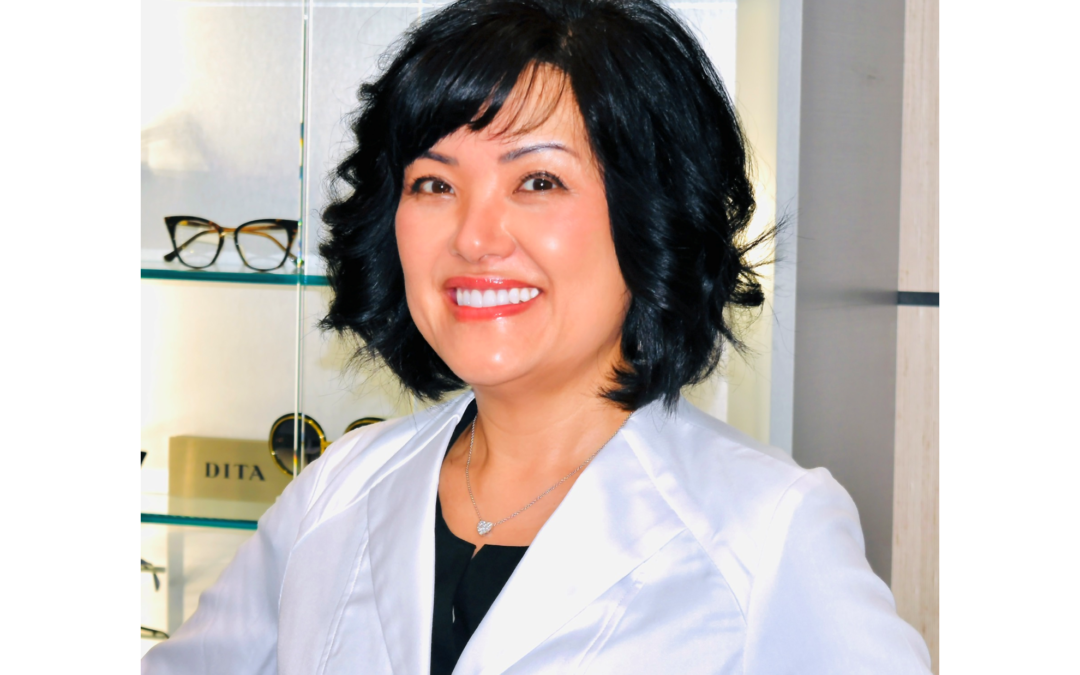 The featured Diva of the week is Dr. Sarah Ito.  Read the feature to learn how Sarah is living the dream life today that she imagined as a child.

1. Tell us a little bit about you?

I emigrated to the US in 1975 with my family. We had many hardships and struggles but through the example of my parents, I learned to persevere and overcome every challenge put in front of me.

I live in gratitude because I am living the dream life today that I imagined as a child. I make a point to always encourage others to go for it, to dream big and to believe that they can do whatever they set their mind to. The happiness comes from the small milestones reached along the way, so I write in my gratitude journal every day

2. What made you decide to become an Optometrist?

My mom suggested the profession to me while I was in high school, but it wasn’t until college that I decided to pursue Optometry as a career. It was a perfect choice for me because it is a mix of creativity, constant personal growth and learning.

As an Optometrist, I can build relationships with my patients for many years and also be an entrepreneur. Plus, my practice environment allows me to develop an extended family with my team. I’ve been practicing since 1993, and I love it!

I consider working in and on my practice a career as well as a hobby. I am fortunate to have chosen this path and it’s quickly becoming a family tradition. My two children have decided to join me in the profession. My son is starting his optometry residency this summer and my daughter is starting her first year of optometry school this coming Fall. I couldn’t be more proud!

Within the last couple of years, I did a complete remodel and expansion of my practice as well as my home. Due to the COVID-19 pandemic, I was able to accelerate my stepping away from patient care significantly to work more on the business. With the help of my team, I can work one day per week and still grow the practice. We are working to double the practice within the next three years. I am fortunate to have this much balance in my life.

3. What Optometry school did you go to?

4. Where do you currently practice?

5. Do you have any particular area of focus?

6. Name 1 to 3 hurdles you personally faced in your career and how did you overcome them?

Initially, I worked for a year and a half for a private practice. It was fun to be able to walk to work because the office was three blocks from a high rise condo I lived in. I was basically just doing a basic exam and prescribing glasses or contacts there and I soon became bored.

A friend of mine connected me to  a commercial lease opportunity at a side-by-side leased location. Right away, I began using an EMR even though it was very rare back then and with high tech instruments I purchased, made it like my own private practice.

The business grew and it was very comfortable, but after several years, I came to realize the corporation’s promotions were not in line with my own personal ethics. After having more and more conflicts with the management, I decided to leave.

I soon found a private practice to purchase and during escrow, they terminated my lease abruptly with a 30-day notice. They did not know about my leaving yet, so I was fortunate that I had the next steps planned out and the two months I had off in between was the perfect length of time to complete the credentialing and other preparations.

During the private experience, I encountered many, many challenges especially due to HR issues during the transition and initial growth period. The previous owner kept the sale a secret until the last moment and left after two days with no transition, so the staff had a lot of insecurity and distrust. One by one they were lost due to unfortunate events.

We went through many growing pains. But, at present, we have an outstanding team that I am proud of. I consider them my dream team because they care deeply about the success of the practice and work hard to maintain a positive culture. In turn, I am supportive of them and share everything I learn about everything with them. Just as my patients expect new services and products from me every year, my staff expect me to share new life elevating ideas from me.

7. If you could go back to when you were a student, what advice would you give yourself?

I would tell myself to jump into private practice sooner; treat the practice as a business and not a job sooner; think bigger, do not sweat the small stuff; take care of my health and wellness with daily rituals; and nurture relationships.

Do you have a product or side business you’d like for us to include in your feature? If so, write a brief description of the product and/or service below plus the link where the readers can learn more about it.

I am a consultant for Rodan and Fields, and I believe my skin is aging much slower because of the products. Patients always remark about my appearance and say I am aging backwards. They often ask what I use which leads to new sales. I do see a difference between my skin and my high school and college classmates. My store link is ito.myrandf.com.

To contact Dr. Ito email her at [email protected] or click on the social media icons below.

Want to be the next Diva of the week?

The Diva of the Week Feature is reserved exclusively for our Elite Divas. This promotional feature will give you exposure as an expert in the industry, create credibility for your patients, employers and colleagues and expand your digital footprint.

Ready to be promoted? Click below to join today!