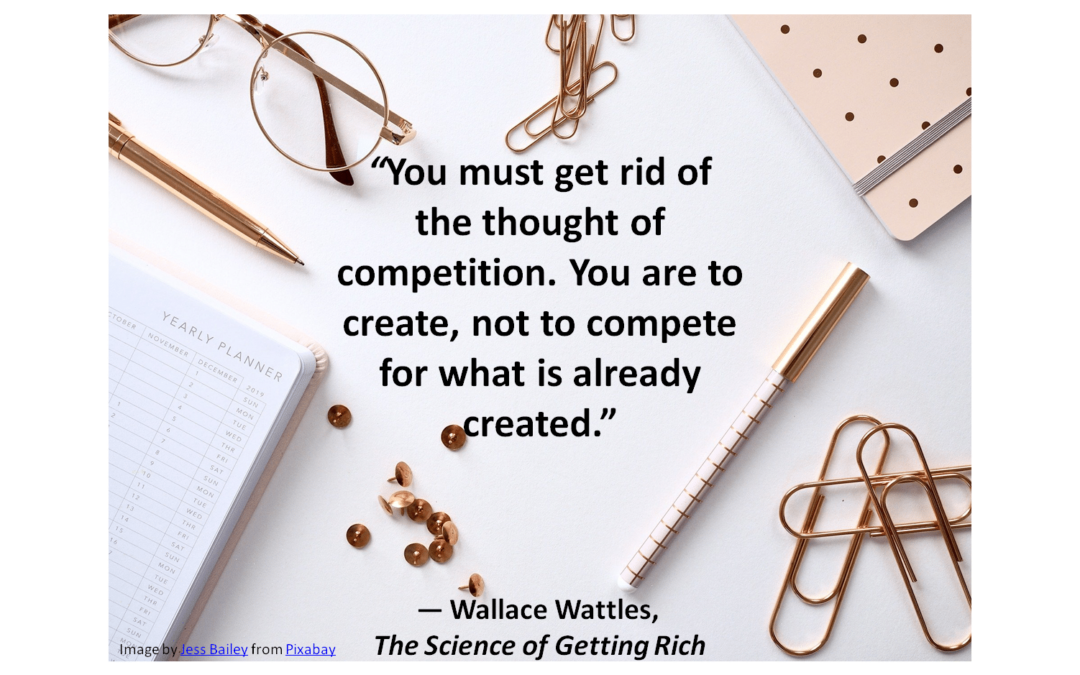 The biggest mistake many of us make is to adopt a lack mindset that causes us to believe opportunities are limited.  As a result, many believe the only way to succeed is to compete over limited resources. That is NOT the case. There’s more than enough opportunity and resources for everyone in the world.

According to Wikipedia, competition arises whenever at least two parties strive for a common goal which cannot be shared: where one’s gain is the other’s loss.  This is a classic example of a Lack Mindset.

The mindset we adopt about the world determines our reality. If you believe that there isn’t enough to go around, then you must compete or you’ll lose. However, if you chose to believe that there is an abundant supply of everything you could ever want and/or need, you’ll be amazed at the possibilities.

Don’t get caught up in the game of Competition. Instead, rise to the arena of creation. You can have whatever you want if you’re willing to trust the guidance of the creative power inside of you.

You do not have to strive for something that someone else has.  You can create your own. Instead of win or lose, you can choose – win, win.

When you realize that no one can ever take what belongs to you or get “there” before you, it will change everything.  You will no longer seek to compete. You’ll genuinely celebrate with others when they succeed. Instead of criticizing, you’ll encourage. Instead of putting down, you’ll uplift.

This Labor Day weekend, as you reflect on your career and/or business, chose to adopt a mindset of abundance. When you return to work, instead of complaining about your current job, be grateful for what you have. Understand that your current situation is an opportunity to create something better.

If you begin to look for ways to create more value for all you come in contact with; it’s only a matter of time before you’ll create the opportunity you want. You can have whatever you want if you’re willing to create it.

“You must get rid of the thought of competition. You are to create, not to compete for what is already created.” — Wallace Wattles

This workshop will give you the tools to identify the top 5 Core Values for your practice and your life.

These core values will help you discover your creative power to create the life you want.